Trade, health and profit in a time of pandemic

/ Blog / Trade, health and profit in a time of pandemic

Every aspect of global health policy must now be reconsidered from the perspective of AP (After the Pandemic), although the pandemic of course is still with us.  One of the pandemic’s early lessons was the fragility of a profit-oriented system for vaccine development.   Before the pandemic, there were only four major transnational vaccine producers, although the vaccine market was immensely lucrative for them.  Earlier this year leading US researcher Peter Hotez warned of ‘a broken ecosystem for making vaccines’.  The situation is even bleaker for diseases of the poor, where ‘the likely recipients of a vaccine against these pathogens will be in Asia and Africa, whereas the markets that enable an acceptable return on investment … are largely in North America and Europe’.

The response to the coronavirus pandemic from the research community has been remarkable, with (at this writing) no fewer than 32 vaccine candidates already in clinical trials.  From a trade policy perspective, a critical issue is how intellectual property (IP) in whatever vaccines are eventually successful will be owned and shared.  If ever there were a case for invoking the public health emergency exceptions to the Agreement on Trade-Related Aspects of Intellectual Property Rights (TRIPS), this would seem to be it … yet there has been curious silence on this point, despite the volumes of public financing (more than US$ 10 billion in the United States alone) that have supported vaccine research.

One suspects that this is partly because national governments are more concerned about ensuring rapid access for their own electorates or preferred constituencies than about either cost or access for the world’s majority with shallower pockets.  Without substantial vaccine manufacturing capacity in the public sector, even the most well-meaning governments and research establishments must rely on private industry.  This may be why, as reported in Fortune, the British university that is leading one of the major vaccine development initiatives signed an exclusive licencing agreement with the pharma transnational AstraZeneca.  The article in question also pointed out that the terms of many procurement deals being agreed by rich governments remain shrouded in commercial secrecy. 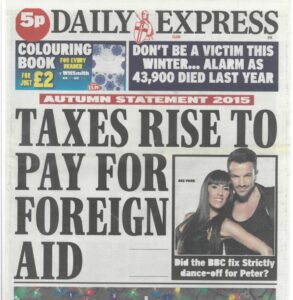 Under any imaginable circumstances, immunisation initiatives in low-income countries, and some middle-income ones, will need to be funded externally – that is, by development assistance.  As suggested by the illustration, which is drawn from happier times, against a background of savage recession the public in many high-income countries may be sceptical about financial commitments to immunise ‘others’, regardless of the price.  The need to pay industry’s price will simply mean such efforts don’t happen, even as the royalties earned by some researchers and their institutions from rich-country sales make the Millionaire Maker draw look like small change.

Lessons can be learned from an important historical precedent.  At the end of the last century, the pharma industry’s insistence on protecting its intellectual property rights in the first generation of antiretroviral therapies led to the first great trade and health battle.  A coalition of civil society organisations and (some) governments in low- and middle-income countries eventually won the battle to make affordable generic antiretrovirals available.  In turn, this enabled one of global health’s most remarkable success stories: more than two-thirds of the world’s seropositive people now have access to antiretroviral therapy.  Crucially, almost half of health spending on HIV/AIDS in low- and middle-income countries is funded by development assistance.

Two-thirds is not good enough, but the critical point is: even this could not and would not have happened without determined political efforts to place health protection above the maximisation of private profit, thereby making provision of antiretrovirals affordable.   We are in the realm of conjecture, but if and (we hope) when effective vaccines against COVID-19 are demonstrated, the next great trade policy and health battleground is likely to involve access to generic vaccines, whether manufactured under compulsory licences or mandatory patent pools, along with mobilising public investment in the relevant manufacturing capacity if not for this pandemic, then for the next.

A good read here from @IISD_news on how #TradePolicy is now multipurpose: https://t.co/uqEZtsvX1e We'd add… https://t.co/6TdFR1oWih Which six changes would you make to put #PublicHealth into #TradePolicy? Here’s our suggestions:… https://t.co/URN6wiFR05 Great briefing from our @UK_PRP sister network @MatCHNet_ looking at methods of evaluating #EarlyYears policies https://t.co/FcS6nvEFUO